Social networking seems to be unavoidable in the world today.  It's the newest form of business communication and staying connected with people that wouldn't normally remain as a part a social environment as inevitable growth and change distance us all.
Or is it?
In doing research on how social networking effects Greece, I found there is some evidence to suggest that ancient greeks were involved in social networking as well.  According to http://www.balkantravellers.com/, Greecian temples built in Sicily about 2500 years ago were all built facing east, and research suggests that this was done in order to connect Greeks living on the edge of the empire with the Greeks on the mainland.  In their article, they quote a researcher Alun Salt:
"Ancient Greeks who lived in Sicily had their temples face the rising sun not for religious reasons, but to adhere to Greek conventions and forge a stronger bond with Greece. . . If you were a Greek living in the Greek homeland, you knew you were Greek. The Greeks in Sicily were Greeks living at the edge of their world. They may have felt they had something to prove." 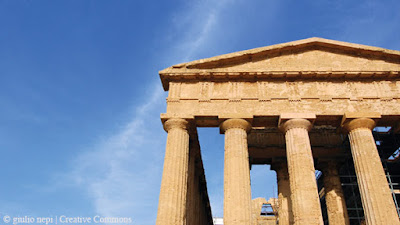 The rest of the article can be found at:  http://www.balkantravellers.com/en/read/article/1644
Posted by holly at 8:44 PM