After brainstorming and coming up with several different sketches, I realized that designing a luminaire would be much easier if it had a purpose and a place.

Right away I knew what problem I wanted to resolve with the design:  I wanted to create a light source that could be left on all night without being obtrusive but was bright enough to light a long dark hallway.  The space it would go in was about 4 feet wide with a 10 foot ceiling, and the light source would have to be very shallow so that it wouldn't be bumped into. 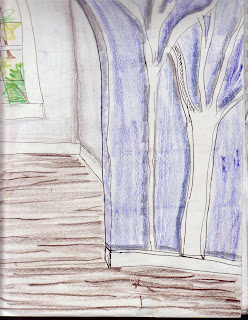 I had a couple preliminary ideas that somewhat resembled shallow shadow boxes, with rice paper acting as a diffuser for twinkle lights.
The twinkle lights didn't conform with the project assignment, however, and I felt as though tall skinny flimsy boxes might not travel to and from school very well.

Then I saw a zen-looking black and white boxy lamp at the store, and carefully examined the way it was put together.  I had my sketchbook, so I drew a quick sketch of how the joints were put together.  A few days later I went to the wood shop with a few loose ideas and talked to Matt and AJ.  Their knowledge helped me come up with a concrete plan and shape for the frame of my luminaire. 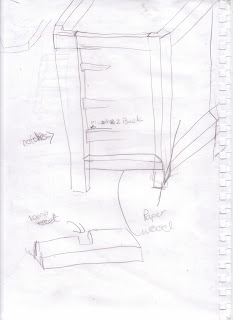 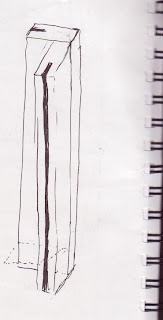 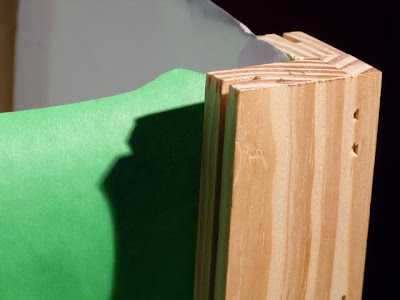 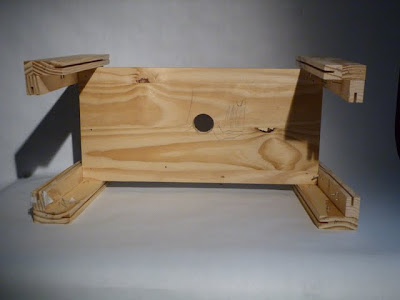 I had several ideas for how the top of the luminaire would look.  I knew that this part would be the most important, as it would be responsible for most of the light effect.  I made the top for the model out of paper, and tried several versions. 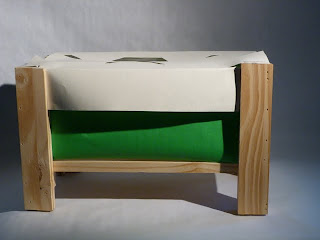 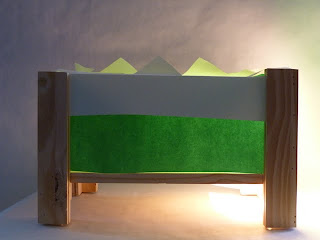 During the interim critique, it was pointed out to me that I really had 2 completely different effects at work.  One was the intended, projected onto the wall and table top from the cutouts in the top and sides, and the other was the luminaire itself, brightly glowing green from the paper I used.  Suggestions were made that I should experiment with different paper types, textures and layering while retaining the basic box form.