While researching some of the given designers and manufacturers, I found that they all had concepts and ideas that were new, groundbreaking, or just really cool.  Keeping the final luminare project in mind, I chose a few of my favorite designs/designers to help get the ideas flowing. 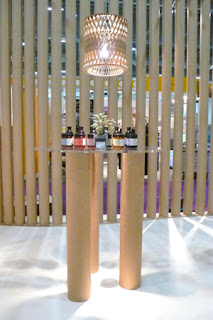 " Project developed for the international cosmetic company Davines at the Cosmoprof fair in Bologna 2007. The concept was to materialize the idea of "sustainable beauty" using recycled materials as paper and to offer a space able to communicate the philosophy of the company. Visitors were invited to discover the products little by little due to all the transparencies crated by many different paper shapes" (http://www.shigerubanarchitects.com/) 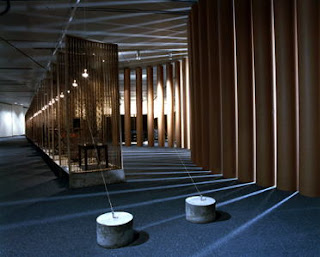 I think that Ban's use of paper as a structural material in an effort to advance sustainability is groundbreaking.
He uses paper in an innovative way that pushes the limits of the materials' integrity while creating a design the urges people to explore it further.  The structure of his objects become a part of the design.
In the pictures above, I love the way light bursts into the space, creating visual lines that pull the eye back to the paper wall.  The angle and direction of the light lines are energizing and create excitement.
Peter Zumthor
Zumthor appears to take the opposite approach to his designs, at least with regard to sustainability.  Critics of his architecture have called his buildings "jewels of luxury", specifically referring to the one below.  It seems to be in the middle of nowhere, limiting its usefulness. 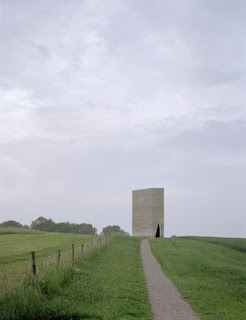 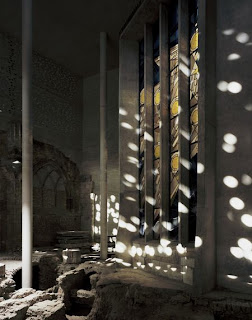 I like the way he uses a dichotomy of natural and man made objects and shapes.  Rough textured rocks contrast with the perfect, smooth cylinder, and he uses repetition and light to emphasize the circles - a shape that is rarely seen in nature.  The light source here appears to be natural, and I would be interested to know how he made the light effect appear so "crisp".
Joan Lao
The light effect in the picture below is really unique for a floor lamp.  Generally, floor lamps don't focus as much on the effect as they do on the style of the lamp and shade.  Here, both are celebrated.  I love the way the photograph really portrays a sense of balance  between light and dark shapes.  Both the shade and stand are made from steel. 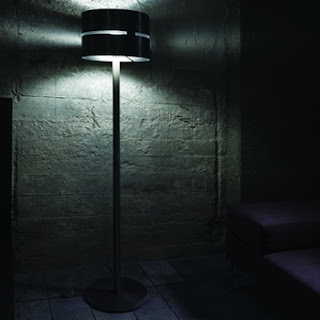 This table lamp also creates a nice balanced effect.  The base is steel and the shade is made of wooden slats.  Both lamps were designed by Joan Lao in Spain, and
they can be found on the ylighting website. 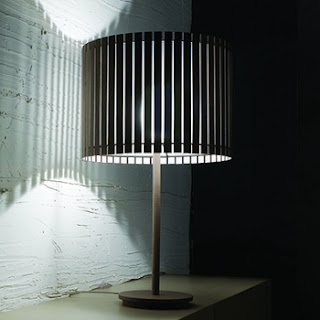