Action.  Reaction.  Response.  Cycle.
Everything that is done is based, either loosely or directly, on something that's been done before.  The renaissance responded to the gothic and dark ages.  It created rules.  The baroque stretched and broke those rules, pushing the limits a little further.  Neo-classism wanted to once again go back to basics, and the victorian pushed the ornamental.  At the beginging of each of the design time frames, innovators were considered cutting edge and dramatic, evolving over time to acceptance and the norm.  Today, modernism is becoming synnomous with sustainability, reacting to our careless ways we've treated the environment in previous years.  Limited natural resources, along with space, force us to create and innovate new sustainable technologies.  For example, solar panels, once critized for high initial costs and less than appealing looks, are appearing everywhere, from the tops of highrises to streetlights to lawn ornamentation.
Upcycling is another new trend in architecture.  Taking the idea from shanty towns, some firms have gone to the extreme, creating chic houses and other buildings with found materials.  Below, the dutch firm used such things as broken umbrellas and busted billboards to creating lighting solutions and handrails. 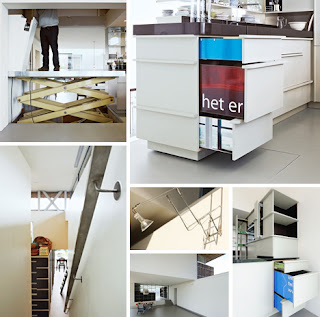